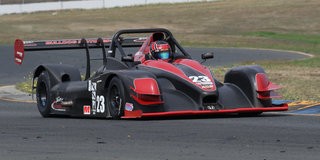 SONOMA, Calif. (October 21, 2018) – Jim Devenport made a late race push to earn the victory in the Prototype 1 (P1) race at the 55th SCCA® National Championship Runoffs® at Sonoma Raceway.

Devenport, of Modesto, California started in second in the No. 23 Cranbrook Group Norma Auto Concept M20 F Honda, but found himself in fourth by the end of the first lap. By lap six he had worked back to second, but was nearly eight seconds behind Perry Richardson in the lead. Lapping considerably faster, Devenport closed the gap over the next 10 laps, eventually pressuring Richardson for first. Devenport finally got around Richardson for the lead on lap 18, even though his right-front bodywork was coming loose. Richardson didn’t give up and continued to push for the next lap, but couldn’t retake the position.

“I had to work my way around Nicklin and then Richardson was gone,” Devenport said. “But my lap times were gaining on him so I kept digging and eventually, once he was in sight, it was a whole lot easier.”

Richardson started in the sixth position in the No. 69 Casino Fandango/Briggs Consulting Stohr WF1 Suzuki. Crediting his efforts to put heat in the tires during the warm up lap, Richardson rocketed to the front of the field by the end of the first lap and earned the Sunoco Hard Charger award in the process. He continued to gap the field and eventually had an eight-second lead.

Richardson explains, “I had more grip than the rest of the field for the first half lap and started marching forward. I did miss my tire pressures and came in a little high, but the only person that could hunt me down was Devenport, so that’s not too bad of a run.”

Tim Day Jr. qualified the No. 8 Mere Mortal/Hoosier/Summit Stohr WF1 Suzuki in third position, but took the green in seventh after spinning on the pace lap while warming his tires. He worked back to fourth by lap three where he found himself doing battle with Nicklin and Devenport, eventually earning third place which he held until the end.

“I felt confident I would be able to hunt down the people in front of me and I just needed to race forward,” Day said.

Live, online video coverage of Runoffs races, presented by Mazda, is available throughout the three days of competition at SCCA.com/live. An audio race call, supplied by the Super Tour Radio broadcast team, is also available at www.SCCA.com/live , as well as live timing and scoring for each National Championship race.